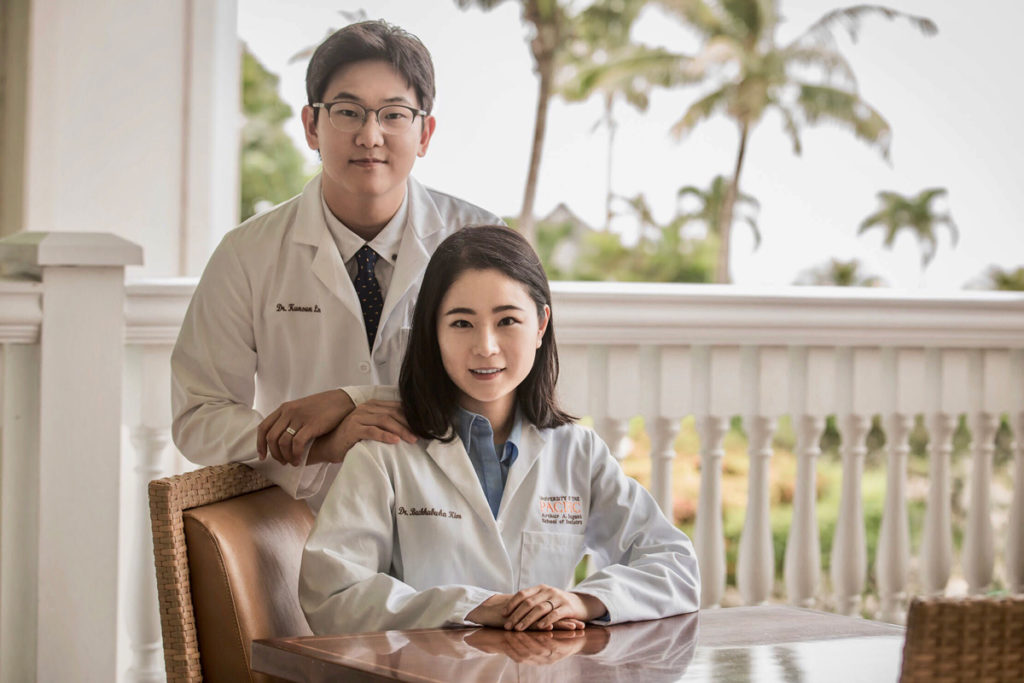 Dr. Lee and Dr. Lily got married soon after graduation from dental school. They moved to Guam in 2016 so they can visit their family in Korea. They strive to provide the best dental care to the families of Guam. When they are not in the office, they like to go to the beaches, watch movies and travel.

Dr. Kunsun Lee grew up in Korea and moved to the States when he was a teenager. He was accepted to the accelerated dental program at University of the Pacific. Finishing college in two years, Dr. Lee attended University of the Pacific Arthur Dugoni School of Dentistry in San Francisco. Following graduation from dental school with Tau Kappa Omega honors, Dr. Lee successfully completed Advanced Education in General Dentistry from NYU Lutheran Medical Center in Worcester, Massachusetts. Dr. Lee had such a passion for dentistry that he was immediately offered a preceptor position at his residency program. When he moved to Guam, he worked at FHP for two years with his last year serving as head director for the dental clinic. As an artist himself, he has always been motivated by artistic side of dentistry and strive to provide comfortable treatment to patients.

Dr. Lily was born and raised in Korea and she came to the States when she was in high school. She attended the accelerated dental program and completed undergraduate studies at University of the Pacific. She graduated from University of the Pacific Arthur Dugoni School of Dentistry in San Francisco with Tau Kappa Omega honors. Dr. Lily knew right away that she wanted to pursue pediatric dentistry because she loves working with kids and finds it tremendously rewarding.  She successfully completed her pediatric dentistry specialist training at Boston University Goldman School of Dentistry. After moving to Guam, Dr. Lily worked for two years at private practices before joining Reflection Dental team.

Dr. Neil Limbo has dreamed of working as a dentist on Guam since his high school days at Father Duenas Memorial School (FD). He moved to Guam from the Philippines at age 5 and grew up in the village of Chalan Pago. After graduating from FD in 2005, his family relocated to the US mainland where he earned his bachelor’s degree in biology from the University of San Diego (2009). In 2015, he earned his Doctor of Dental Surgery degree from the University of the Pacific School of Dentistry in San Francisco. Thereafter, he moved to New York and completed a 1-year general practice residency at St. Barnabas Hospital in the Bronx. His hobbies include playing basketball, spending time with friends, and going to the beach.

Autumn and her family moved from Seoul, Korea. Raised on Guam since the age of 5, she attended Academy of Our Lady of Guam. She moved to Boston after high school to attend the University of Massachusetts (UMASS) Boston. In 2009 she graduated with a Liberal Arts degree in English. She then furthered her education by obtaining her Bachelor of Science degree from Massachusetts College of Pharmacy and Health Science (MCPHS) at Esther M. Wilkins Forsyth School of Dental Hygiene in 2012. After obtaining her board certifications in dental hygiene and local anesthesia, she remained in Boston to practice and train as a dental hygienist for five years in a multi-specialty private practice.

In early 2017, Autumn left Boston and returned home to Guam. The pull of home, family, and island life was too great to ignore. She is proud to share her knowledge and expertise with her patients on Guam.

She was born and grew up in Japan.  Her first career was working at U.S. Navy in Japan as an administrative specialist after receiving an associate degree. While she was working, Kat decided she wanted to be a dental hygienist for her next career. She attended dental hygienist school from April, 2011 to March, 2014 including internship assignments at several dental clinics.  After graduation she received her Dental Hygienist License in Japan.

In 2016, she moved to San Diego with her husband. She attended California Dental Certifications to be certified as a dental assistant in California and upon completion of the program Kat started working at a dental clinic in San Diego.

In April, 2018, she moved to Guam with her husband who was transferring to the Naval Station in Guam. She received Dental Hygienist License in Guam. Her interests include going to the beach. When she is not working, she also likes traveling, eating and driving in Guam.

Her goal is provide the best care for each patient.

Our goal is to make you feel like you’re a part of our dental family, from the initial phone conversation to your new patient experience, and then with each successive dental appointment. Our front office team members work hard to assist you in planning your next dental visit.

We try our very best to take the anxiety out of sitting in the dental chair. We know that having dental treatment is not something everyone looks forward to. Our team of assistants is trained to give you the most comfortable and informative experience while you are in our care.